On 30th September 1989, the GVFB set off to travel the 20 miles to discover the source of the mighty River Ise.

Leaving from the Old Bridge in rubber dinghies at 14:00 numerous hazards were experienced early in the trip up to the New Bridge. A successful rendezvous with Queen Eleanor and from here the Brigade took to foot with for the final march.

Eventually the expedition arrived at a field on the Sibbertoft Road near the Naseby battlefield monument where the Ise was alleged to rise. A muddy area fed by spring water was found and declared by Fireman Hughes as the source. Queen Eleanor was brought close and ceremoniously replenished the stream with her tank full of Geddington bridge water.

The party retired to the Fitzgerald Arms at Naseby where together with partners all enjoyed a hearty meal eventually returning to Geddington without Queen Eleanor who had to be left in the pub car park and collected the next day! 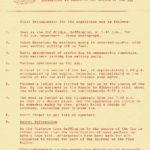 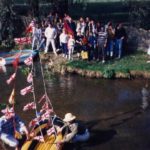 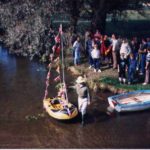 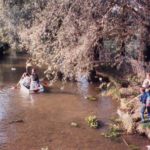 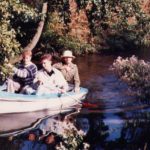 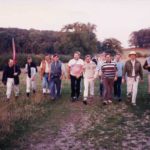 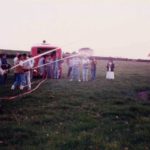