The Brigade was formed in 1977 during the National fireman’s strike. It is now a registered charity with a membership of some 80 men.

Its aim is to support the local community in general but also specific groups, individuals and organisations. This serious side is very much tempered by a real sense of fun.

History of the Brigade

It began quite by chance really, in 1977, a year which will always be remembered for its “winter of discontent”, the regular firemen took what was for them the rare step of going on strike. Although the Government announced emergency plans, villages like Geddington seemed distinctly vulnerable if disaster were to occur. 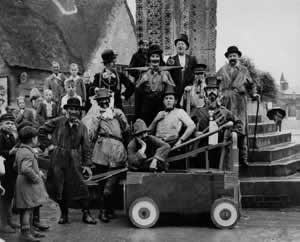 Jim Harker a well known local dignitary immediately organised a team of volunteers, drawn from all sections of the village community, who were ready to turn out at any hour to help in any emergency which might arise.

These volunteers had no training or special expertise but they mustered between them a great deal of talent and they shared a willingness and determination to do what they could, should they be needed.

Chance might not have played as much of a  role as was originally thought however, the photograph aside shows Jim (foreground far right) at a 1951 Festival of Britain celebration with an early village fire pump now in Kettering museum.

Fortunately, apart from a tree felled by a winter gale, their resolve was never put to the test, but the enthusiasm which had been engendered had a special quality. The firemen’s strike ended and the volunteers staged a “standing down” dinner, which was so enjoyable that an anniversary dinner was arranged for the following year.

At this second dinner, it was decided that there was a permanent place in the village community for a body of men who were willing to join together to tackle any emergency, firemen or no firemen, and so the idea of the Geddington Volunteer Fire Brigade was born.

On 7th December 1979, the Brigade was formally established with Jim Harker elected by acclaim as its chief. From then on events acquired their own momentum. A Coventry Climax pump was acquired. It’s provenance was one of the original pumps used in the blitz in Coventry. The Brigade obtained charity status, a goat Lucifer, was adopted as mascot, and a marching song was composed.

Jim’s son, young Jim devised a logo depicting the ultimate sacrifice: when there is nothing else to hand use your beer and the motto “Go to Blazes” was coined.

It was all harmless fun but, beneath was a serious purpose: a body of men to help in any village crisis. Not content with the trailer pump Jim Harker was soon in negotiations with RAF Bitteswell to purchase a full-sized fire engine, a redundant 1953 Airfield foam tender driven by a straight 8 Rolls Royce engine.

The engine was named “Queen Eleanor” after our most famous inhabitant and was subsequently christened at Boughton House in September 1981 by Her Royal Highness Princess Margaret, The Princess rose by pouring a bottle of home made wine over the radiator. She was accompanied by the chief and Lucifer. Eleanor was to become a popular feature at local fetes, swelling the Brigade’s charity fund. This steadily growing fund provided for a Christmas bonus to senior citizens in the village. 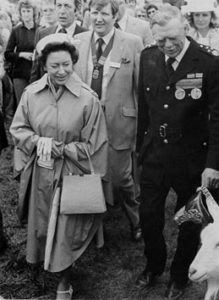 The Christening of Eleanor

The tradition of an annual dinner has been maintained throughout the years since 1979 allowing us to do what we do best – drink.

On 2 February 1984 the Chief died, shocked and saddened by his sudden death  members of the Brigade agreed that although the Brigade would carry on without him he would be the only Chief. Their future leaders would be elected annually and given the title Commanding Officer. The staff of office turned from an oak from Geddington chase.